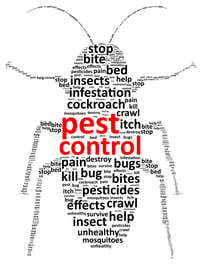 to your home and require different control methods. The following are some of the different types of pests that people commonly have to deal with:

Ants may not seem like the biggest problem to have; however, it depends on the type of ant. While normal ants may only be in the search of food and are generally nothing more than a nuisance, carpenter ants can cause serious damage to your home if you don't take care of the problem quickly. Carpenter ants will burrow through wood, which means that they can cause serious structural damage to your home. In fact, carpenter ants are known to be responsible for millions of dollars in property damage every year.

When it comes to black ants, identifying them isn't difficult. They'll march straight out into the open if there's food around, which is why they're often found in the kitchen. Carpenter ants can be more difficult to find because of the fact that they like to live in wood. They tend to be attracted to wet or rotting wood, which means that if you have any rotting wood around the exterior of your home, odds are that if you have a carpenter ant problem, it will be around this area.

How to prevent an ant problem:

People tend to be terrified of spiders. This is because everyone knows that certain spiders are venomous; however, these types of spiders are very rare. The thing about spiders is that they don't typically go after humans unless it's in self-defense. However, they can certainly be a pest. While spotting one or two spiders in the basement might not be a huge problem, you don't want them to begin reproducing in your home either. Although most spiders make their way in your home because they are hunting for other bugs, if you spot any larger spiders, you'll definitely want to contact a pest control service just in case they might be venomous. While most are probably harmless, it's not a risk you want to take, no matter how rare venomous spiders in your area might be.

How to prevent a spider problem:

Cockroaches aren't dangerous. They don't have venom and they don't bite. They also rarely carry diseases that they can spread to humans. However, they are extremely dirty and can be an incredible nuisance. Not to mention that they will multiply and cause an infestation if you don't try to prevent and control a cockroach problem. There are several ways that you can tell if you have a cockroach problem. If you see them out and about in your home on a regular basis, odds are there's an issue. Most cockroaches thrive in humid conditions and will be near food and water sources, which is why they will often be found in the kitchen, bathroom, and basement areas.

You can also hear cockroaches and smell them. If you have a serious cockroach problem, you'll be able to hear them scurrying around at night. You will also be able to smell an unpleasant odor if you have an infestation. A pest control service will be able to identify if you have a problem and where the source of the problem is so that they can spray the proper areas, killing not just the cockroach population that has taken hold in your home, but also destroying their nests.

How to prevent a cockroach problem:

Pantry pests are basically pests that feed on dried and processed food products (such as cereal, dried pasta, dried nuts, and more) that you tend to store in your pantry. The most common types of pantry pests include Indian meal moths and saw-tooth grained beetles. Both the pests themselves and their larvae will feed on your food. If you spot beetles or moths around your kitchen pantry, there's a good chance you have an infestation problem -- or are about to have one. You will likely need to throw away dried foods that are exposed (meaning that they are open) and clean out your cabinets. However, you will still need a pest control service to come and ensure that the source of the pantry pests are eliminated and that all the larvae and cocoons are properly destroyed.

How to prevent a pantry pest problem:

Occasional invaders are pests that are generally nothing more than a sporadic nuisance. They are pests that usually live and reproduce outdoors but that will come inside once in a while because the weather is hostile. Occasional invaders can include centipedes, ladybugs, millipedes, crickets, slugs, stink bugs, silverfish, and scorpions, just to name a few examples. While occasional invaders can usually be dealt with easily (such as by getting rid of them yourself), it's still worth getting a pest control service over to your home to determine where the problem is coming from so that you can take the proper steps to prevent them from coming back in the future.

How to prevent an occasional invader problem:

First of all, you should always be taking steps to prevent pest infestations in the first place. However, if you do spot signs of a pest in your home on a regular basis, then it's time to schedule an appointment with a professional pest control service. Even if you're unsure as to whether you have an infestation or not, it's better to address the issue sooner rather than later so that you can prevent a real problem from developing. To find out more about our pest control services or to schedule an appointment, be sure to contact us at SafeHaven Pest Control in Garland, TX, today.