Cockroaches Are Hitchhikers.  You Won't Find Them Walking Down The Road With Backpacks.

You might be horrified at the sight of a cockroach scurrying across your kitchen counter, but you don't have to worry about living with them. You can take measures to control cockroaches.

Do you know how to identify cockroaches correctly? If you make a mistake identifying the pest you see, you could use the wrong pest control tactics.

Once you can identify the different types of cockroaches that could infest your home, you'll be able to control them effectively. Follow this cockroach guide to help you identify and prevent cockroach infestations. 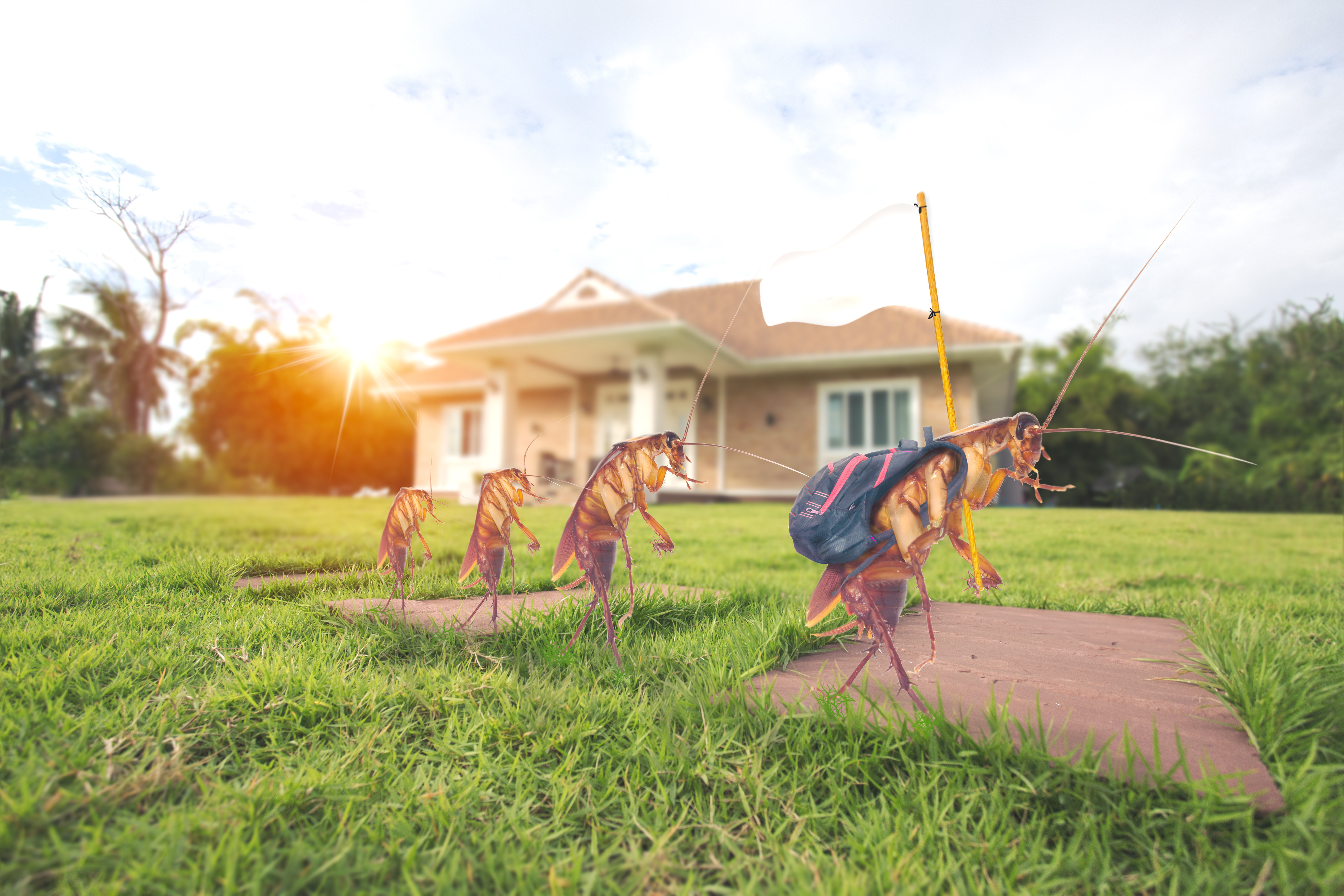 Etymologists believe cockroaches originated during the Carboniferous era, which ended 280 million years ago. They are one of the most primitive winged insects.

Did you know that there are over 5,000 cockroach species around the world? Fortunately, only a few of these infest homes.

Here are the five common species of cockroaches that can invade your home.

You usually find German cockroaches in the kitchen. The adults are about one-half inch long with tan bodies. They live in large numbers.

The American cockroach is the largest of the common cockroaches. It reaches one and one-half inches when mature. They usually infest places where there's food, such as restaurants and food preparation establishments. If you live near one of these, these cockroaches could move into your apartment or house.

The Oriental roach grows to about one-inch long. It is either very dark brown or shiny black. It's often referred to as a "black beetle" or "water bug."

These roaches like damp areas and can get into your home through sewer openings. They usually stay outside during the warm weather and move into homes when it's cool outside.

The Brown-banded cockroach lives in southern parts of the U.S. It looks like the German cockroach but has different habits. These cockroaches can infest your entire home, rather than just the kitchen.

They usually get into your house from luggage, furniture or other materials shipped from other places.

Woods roaches live under dead trees, stumps, and logs. They will come into your house if you live near wooded areas, but they prefer living outside.

The males grow to about one-inch in length and have dark brown bodies with a light stripe on the outer edge of their wings. They can enter your home by flying or if you bring firewood into your house.

The females have short wings and look like Oriental roaches. The females don't normally enter houses.

Cockroaches like dark, hidden areas to rest and hide during the day. These are usually areas around your kitchen sink, cabinets, and cupboards. Other common hiding areas for cockroaches include:

Cockroaches are agile and astonishingly fast creatures. They quickly dart into cracks and crevices when you turn the light on. So, how can you tell if you have cockroaches? Look for the telltale signs of cockroach activity, especially in the areas of wood, water, and warmth.

By making note of cockroach evidence, you get detailed information to help choose the most effective control products. Even the smallest detail can be the key to successful cockroach extermination.

The Damage Termites Cause?

Since termites’ main source of food is wood, they can compromise the safety and strength of infested structures. The damage caused by termites can cause structures to be unlivable and will require expensive repairs. Termites do not only affect wood structures. These pests can transverse metal sliding, plaster, and other materials. Termites can also damage floors, cabinets, wooden furniture, and the ceilings of houses.

If you find evidence of cockroaches in your home, you can use chemical control methods to control them. These include bait, dusts, and cockroach traps.

Unfortunately, cockroaches are very resilient and it's difficult to get rid of them once they've infested your home. If these cockroach control methods aren't effective, you should consult a professional pest control company.

You can control German cockroaches with baits containing boric acid. The bait is inside childproof bait containers. You place the baits in your kitchen, bathroom and anywhere you've seen evidence of cockroaches.

The bait doesn't smell, and you don't have to remove any food or pans from your cabinets.

Boric acid is also the main ingredient in cockroach control dust. These products are applied to hard-to-reach places and dry areas. Cockroach dust is odorless, doesn't stain and non-flammable.

Cockroach traps are small boxes with an opening on the end. These contain a sticky substance that attracts the roaches. Once they enter the trap, they get stuck. Traps are good for catching an occasional cockroach, but they're not effective if you have large cockroach colonies living in your home.

You can use traps to help you locate larger infestations so you can determine if you need additional cockroach treatments.

Even if your home is sparkling clean, and you eliminate any cracks or holes where cockroaches could enter your home, sometimes pests can still get in. If this happens, using cockroach bait, dust and traps can keep the situation under control.

Take the extra time to look for egg capsules that could be glued to furniture, appliances, and clothing. If you find any egg cases, destroy them.

Also, make it hard for cockroaches to get into your house. Make sure you fill any openings or cracks around pipes, near baseboards and in your cabinets.

Also, look for any holes in your window screens and cracks between your windows and frames.

You can use weather stripping and caulking to seal cracks and crevices in any damp areas of your home. This discourages cockroaches from migrating from nearby buildings into your house.

Once you block any entry points in your house, eliminate any food or water cockroaches that can ingest. Make sure there are no food particles accumulating in your kitchen or other rooms in your house.

These are the most common feeding areas for cockroaches:

If you remove any crumbs, seal your food in tight containers, sweep any crumbs off your floor and keep food scraps in sealed garbage cans, you take away the cockroaches food supply. This is the first step in preventing cockroach infestations in your home.

The Key To Elimination Is Interrupting Their Life Cycle

Cockroaches have three life stages as they grow. These are egg, nymph and adult. They lay encased eggs in groups. The female glues the case to the surface where it drops.
However, female German cockroaches carry the egg capsule until the eggs are ready to hatch. The egg cases of German roaches can hold from 30 to 48 eggs. Most other cockroach egg capsules hold 10 to 28 eggs.
When cockroaches hatch into nymphs, they don't have wings. They also shed their skin multiple times before developing into winged adult cockroaches. Brown-banded and German cockroaches can produce several egg capsules per year.