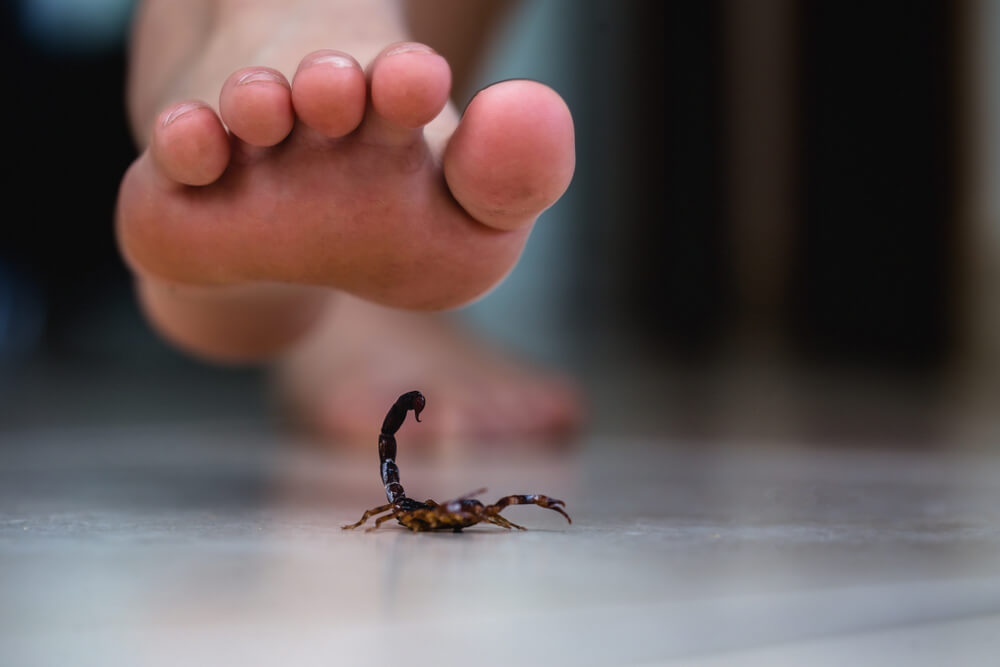 Scorpion Stings and How To Treat Them

What Is a Scorpion?

A scorpion is a small arachnid of predatory nature. There are more than 2000 species of scorpions, though only around 30 species can deliver venom that is dangerous for human beings. Scorpions have elongated bodies with four pairs of legs distributed on either side of their bodies. They also have two pincers at the front and a long tail with a curved end. The stinger at the end of the tail delivers venom during stinging.

Scorpions vary in color, ranging from translucent to yellow and brown shades. The average size is around 3 inches (7.5 cm), though some may grow up to 7 inches (18 cm). In the United States, the bark scorpion is the most dangerous.

Where Can You Find Scorpions?

Most scorpions live in arid and semi-arid regions, under rocks, logs and tree barks. In the United States, you may interact with scorpions in the South West. They are common in Arizona, California and New Mexico. If you hike or camp in any of these states, watch out for scorpions.

How Does a Scorpion Sting Feel?

Scorpion stings are excruciating. The pain is sharp and intense and starts almost immediately after a sting. After being stung, you will experience

swelling, numbness and a tingling sensation at stung part.

While a scorpions sting rarely kills, they can cause a severe allergic reaction known as anaphylaxis. The symptoms of this condition are similar to those of a bee sting. They include difficulty breathing, nausea, vomiting, hives, low blood pressure, dizziness or fainting and a weak or rapid pulse. If you or your loved one begin to experience such symptoms after a sting, call an ambulance, or head to the hospital immediately.

However, even if you’re neither a child or an older adult, it’s wise to consult your primary physician to treat the effects of the scorpion sting symptoms. If you can, capture the scorpion, drop it in hot scalding water to kill it and seal in in a bag when going to the doctor.

You can take sedatives to ease muscle spasms. Your health care provider may also administer IV medication to treat the pain, agitation and high blood pressure. There is also antivenom for scorpion stings, though rarely used.

However, antivenom is extremely useful to treat children, especially those in rural areas and with limited access to medical care. If you develop severe allergic reactions to a scorpion sting, your doctor may also recommend antivenom.

To treat a scorpion sting at home, begin by cleaning the stung area with mild soap and water. To ease the allergic reactions, take an antihistamine and apply hydrocortisone cream to reduce the swelling in the affected area. You can also press an ice pack to the sting to ease the pain. Over-the-counter pain killers such as ibuprofen are also excellent for relieving pain. After a sting, avoid eating foods that are difficult to swallow because your tongue may swell.

Most symptoms disappear after 48 hours without treatment. You should observe how you respond to the treatment and if the symptoms persist, call the doctor. For those with allergic reactions, symptoms may disappear four hours after taking an antivenom.

How to Avoid Scorpion Stings

If you live in areas with scorpions, it’s wiser to avoid them than to treat a scorpion sting. There are several ways to do this:

Knowing how to treat scorpion stings is essential, especially if you live in scorpion infested regions. If you suspect that you have a scorpion infestation, call the nearest pest control company for professional assistance.  Always seek medical advice when necessary.

Removing Wasps' Nests in the House or Attic

Are bees swarming in your yard? Don’t panic!

Have Wasps Invaded Your Yard?