Do Bugs Have Brains

Do Insects Have Brains?

Do you ever wonder if bugs have brains? What exists in their tiny heads? Most insects have tiny brains, but they don’t work as ours do. Some insects such as cockroaches can live for several days without their heads which isn’t the case for humans. So what are their brains for? In this article, we discuss insect brains and intelligence.

Insects have tiny brains inside their heads. They also have little brains known as “ganglia” spread out across their bodies. The insects can see, smell, and sense things quicker than us. Their brains help them feed and sense danger faster, which makes them incredibly hard to kill sometimes.

The Three Lobes of the Insect Brain

An insect’s brain is distributed into three pairs of lobes: protocerebrum, deutocerebrum, and tritocerebrum. The lobes are essentially fused ganglia. They are

clusters of tiny neurons that insects use to process sensory information. Each insect has a different number of neurons.

The first part is the calices. It serves as an input region for incoming information. The second part, the peduncle transfers the information to the third part known as the alpha and beta lobe. The third region then transmits the output.

The little antennae that you see moving around peculiarly are also connected to the insect brain. They have nerves from the deutocerebrum, which is the middle of the three main lobes we’ve mentioned. The nerves are important because the antennae can use them to collect information on tastes, smells, temperature, humidity and deliver other tactile sensations.

The third lobe, which is the tritocerebrum, serves several functions. It connects to the upper movable tip of the insect’s mouth and also processes information from other lobes. It also connects to the stomodaeal nervous system. The nervous system on the insect’s body serves as a sub brain- hence the ability of an insect to survive without a head. 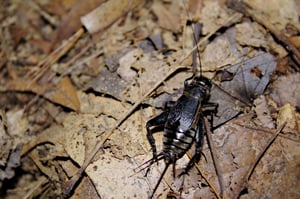 Insect intelligence is a hard one for scientists to crack. Studies are still ongoing. Why is it hard to study? Because comparing our intelligence to insects isn’t the best way to study them. They are entirely different creatures, and breaking them down from a human perspective is challenging. Think about it. Just because dolphins, whales and other large mammals have behaviors close to humans doesn’t make them smarter than insects.

However, insects are smart creatures. Despite their brain size and number of neurons, insects can create memories and make smart decisions. A bee, for instance, has around 1 million neurons, but a human being has billions of them, which consequently increases our cognitive capacity.

For insects, what matters is the size of mushroom bodies. This pair of structures found in the protocerebrum is responsible for learning and memory, which implies intelligence. What this would mean is that insects with larger mushroom bodies are more intelligent than those with relatively smaller ones.

Unfortunately, that isn’t always the case. Bigger brains don’t automatically translate to more intelligence. Scientists argue that generalist insects are smarter than others. The term refers to insects that can adapt to any environment. Think about it.

What becomes of the insect that only knows how to live and feed on one tree or flower? What becomes of this insect when the food source and habitat are suddenly taken away? An animal that ignores its surroundings and lives for one purpose dies if the balance ceases to exist. It’s possible to argue that fleas, for instance, aren’t intelligent insects because they live solely to feed on a host's blood.

A generalist insect, however, is constantly checking its environment for different threats, habitats and food sources. It can be likened to a shrewd investor- always knows how to play his cards and survive. A bee for example, will feed on different flowers until it finds the flowers it should feed on. Ants also display generalist characteristics because they can feed on a variety of plant and animal matter.

What makes these insects more interesting is their social intelligence. Bees and ants live in colonies and are known to leave scent trails for each other. Once a worker finds food, the rest of the colony can follow. Perhaps it’s the socialization of these insects that make them more intelligent. After all, how can the ants and bees ensure that they go home to the right colony?

Understanding insects around us helps us predict their behavior and protect your home from an infestation. Contact SafeHaven Pest Control today!

Everything You Need To Know About Spider And Mosquito Bites

Difference Between Locust And Grasshopper

The Biggest Problem With Pest Control In The Woodlands Tx