We All Know This Scene Too Well

There are many mosquito species or varieties of mosquitoes scattered across the world, with the United States hosting 150 species. Besides making itchy bites, the insects are notorious for spreading some of the most life-threatening diseases to humans. The World Health Organization estimates that mosquito bites cause more than 1 million deaths every year. 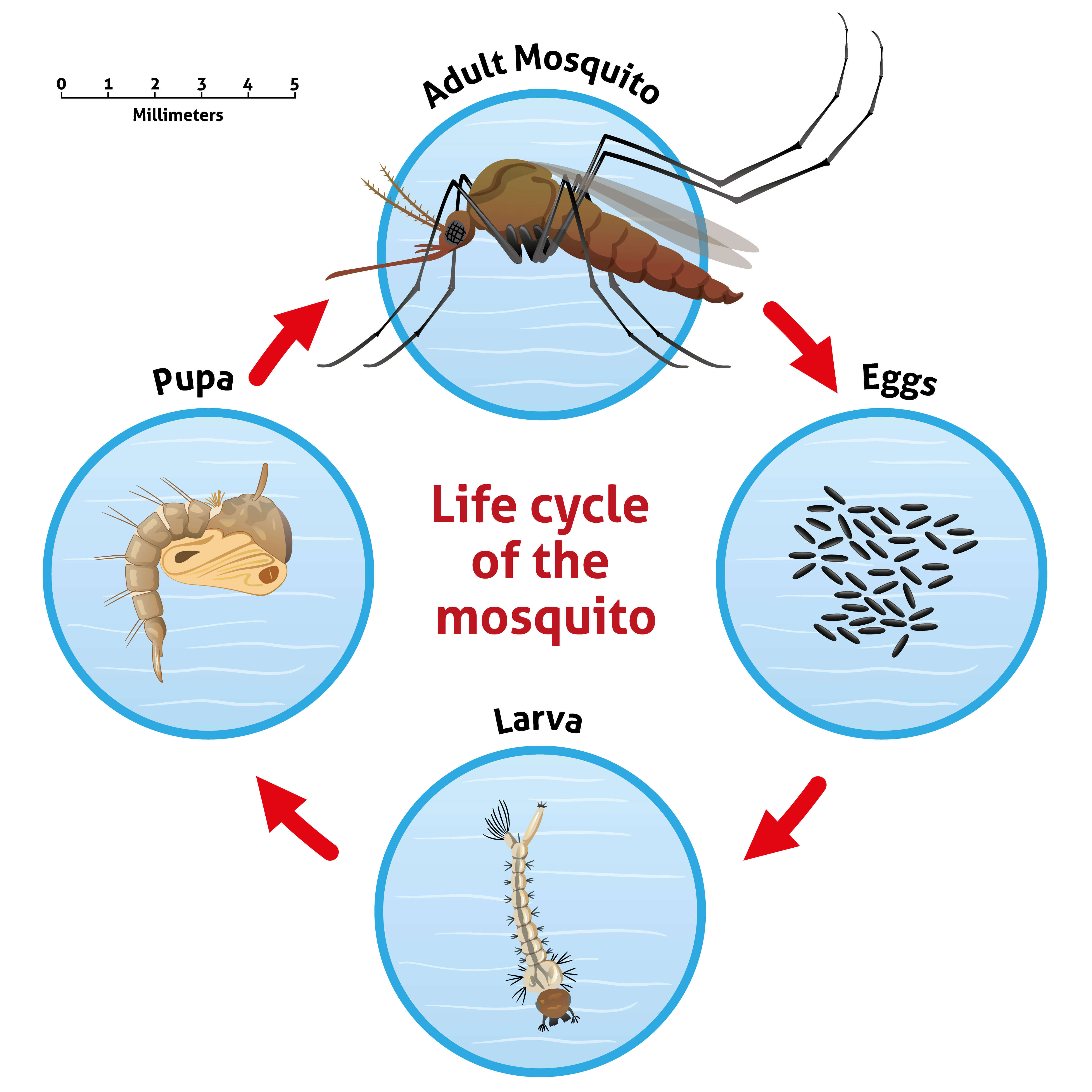 Mosquitoes are tiny flying insects, with their slender bodies stretching about an eighth to three-eighths of an inch. They have a pair of scaled wings, six legs, and elongated mouthparts known as the proboscis. Most of them are black or grayish with white markings.

Due to their size and color, they are quite difficult to spot while flying. Some varieties are more active during the day, and others are more vigorous at night. Most species in the United States have their peak activity around the dusk hours.

Mosquitoes thrive in areas with stagnant water, like around lakes and marshes, where they lay eggs and breed. However, as little as ½ inch of water collected in containers and puddles is sufficient for their eggs to hatch. The insects are found in most parts of the United States. Some species are more rampant in specific regions.

Be on the lookout for mosquito larvae in small bodies of water.

Don't Allow Them In Your Home

The main source of replenishment for all mosquitoes is plant juices and nectar from flowers. Only the female ones bite and feed on human blood, which they need to lay healthy eggs. Since mosquitoes breed continuously, the female ones search for a blood meal at least once every two days to produce the next batch of eggs.

Scientists have discovered several factors that make some people more attractive to mosquitoes than others. Some of the reasons include:

Mosquitoes are vectors for many illnesses. They become transmitters of disease-causing pathogens after biting an ailing host. Below are some of the diseases they can spread.

Most of the deaths associated with mosquitoes are due to malaria. The Centers for Disease Control and Prevention (CDC) helped to eradicate malaria from the leading threats to public health in the United States in the 1940s. However, the country documents more than one thousand cases of the disease each year, mainly due to travelers.

Also known as the Breakbone fever, dengue fever is a mosquito-borne viral infection. Its signs include headache, fever, severe joint and muscle pain, prostration, rash, and swollen lymph glands. Dengue hemorrhagic fever is a more severe form of the disease, with additional symptoms like persistent vomiting, severe abdominal pain, bruising and bleeding, shock, and death if untreated. There have been a few locally transmitted cases in the United States with no large outbreaks.

The leading mosquito-borne illness in the United States comes as a result of the West Nile Virus. Most cases of WNV occur over the mosquito period, extending from summer through fall. There are no vaccines or treatments for WNV in humans, but most of the infected people hardly feel sick. Twenty percent of the infected people may develop symptoms like fever, but only 1 in 150 cases turns serious or fatal.

The first documented cases of Chikungunya were in Africa, Asia, and India, but the disease is currently a worldwide threat. It exploded in the Caribbean and parts of America between 2013 and 2014.

Zika virus has taken a toll on Brazil and many parts of northern South America, Latin America, and the Caribbean. Over 80 percent of infected people don't show symptoms, and most of them don't realize they are sick. Potential signs of Zika include low fever, joint pain, inflamed eyes, and rash.

The infection can cause climbing weakness or leg paralysis. It's also associated with a myriad of problems in pregnant women, including microcephaly, spontaneous abortions, and stillbirths.

EEE is a rare but potentially fatal ailment caused by a virus spread through mosquito bites. Symptoms of mild cases of the disease mimic flu, with fever, chills, and joint pain. Most patients make a full recovery after a week or two.

Severe EEE targets the brain, causing more severe symptoms like vomiting, convulsions, and coma. It takes several days for the signs to appear. According to the CDC, 30percent of the victims die, with survivors having to endure ongoing neurologic disorders.

Most counties in the United States have mosquito control programs to reduce mosquito populations and strengthen public safety. One of their roles is to trap the insects and test them for known disease-causing pathogens. Such measures help to monitor the spread of mosquito-borne diseases and warn the public about risk areas. The county also sprays the surroundings periodically to kill adult mosquitoes.

There is no vaccine or treatment for some of the mosquito-borne diseases. For this reason, it's in your best interest to take precautions to protect yourself from mosquito bites. Let's look at some of the measures you can take to avoid exposure to mosquitoes.

Mosquito prevention begins with draining any standing water collected on your property. By so doing, you destroy the habitats where mosquito eggs develop and hatch. Pay attention to containers, flower pots, tires, and pool covers after a downpour. Change the water in birdbaths regularly.

When outdoors, long pants, long-sleeved shirts, and closed-toe shoes can limit skin exposure. Wear an insect repellant containing DEET or Picaridin to keep away mosquitoes. Use these items when traveling to protect yourself from mosquito-borne ailments that are rare at home but common abroad.

Don't stay outside especially around dusk and in the night when most mosquitoes are hunting for blood. Avoid marshy areas unless you've dressed appropriately and applied an effective insect repellant.

Clogged gutters trap a lot of water during a storm. Make sure the drainage system of your roof is clear to prevent mosquitoes from breeding there.

Window and door screens are ideal for keeping away flying insects. Keep them locked to limit the entry of mosquitoes into your house.

Even with your relentless efforts, the mosquito problem in your property can get out of control. In such a case, enlist the services of a professional pest control company.

Mosquitoes are irritating insects that can infect you with deadly diseases. It's vital to protect your residence at all times, regardless of where you live. Enjoy a life free of mosquito bites by applying the precautions highlighted above. If you get overwhelmed, talk to a pests control officer or a specialized company in your area.